Looking for quality investment properties can put you in some interesting positions.  Often times the home is for sale under duress and the people associated with the home are not please that yo 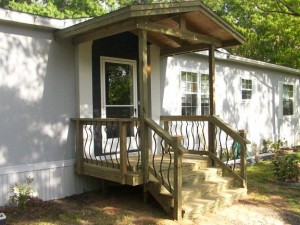 u are there looking to make a buck off their misfortune.  My husband had the privilege of being reminded of this first hand so I asked him to write a few paragraphs about it.  It seems like the “fish” has gotten bigger every time he has told the story but I won’t hold it against him.

Many years ago Alison abandoned me on a mission to check out a mobile home we had just purchased from a forclosure auction.  In the beginning we had a pretty specific niche.  We liked singlewide mobile homes in mobile home parks.  So it was natural that when we found one that was located in BFE but could be moved into a park for the right price to chase it down.

That day the sky was filled with grey ominous clouds.  It had rained earlier in the morning but was overall nice Jeep weather.  I found my way to the house which was on about a half acre,  on a street with three other homes.  I pulled in the mudway (driveway made of mud) like I owned the place because technically I did.  I get out and start checking things to make sure that the house would be able to be moved the following morning.  As I come around the back of the house, I see William Walace running at me full steam in the puddles.  Only it wasn’t William Wallace, it was an older, more round gentleman with clenched fists wearing only his tighty whites.  Please for a minute imagine what you would think would happen running through mud puddles with that apparel.  Yeah, it hurts me still to this day.  While my brain is still trying to process what the man is doing – I finally make out what he is saying.  “YOURNT STEALING MY MAMMMAS PORCH; YOUARNT STEALING MY MOMMMAS PORCH!”  He tired out as he got closer and I introduced myself and told him that my wife and I had just purchased the home and we were excited about it and I was just seeing what needed to be fixed up.   His response, “YOUARNT STEALIN MY MOMMMAS PORCH.”  Still confused and knowing that anything attached to the house was technically mine now.  I asked innocently, “but how will I get in the house without this beautiful rotted porch?”  He wasn’t ready for questions at this point.  He just informed me that his brother and brother-in-law occupied the other two houses and they were not going to let me take her porch either.  At this point, William Wallace 2 joined us.  He was dress and drinking a Coors.  Might have been a tad early on a Sunday for drinking but who am I to judge.  Now with two of them yelling at me, I was getting a little worried.

Was I going to die over a porch?

It was at this moment that my flight or fight reflex became flight or lie.  I still feel bad about the storytime I gave the Wallace’s.  I explained how my wife and I were really excited about moving in to the home and starting a family down their wonderful street.  We had wonderful plans for the home and planned to put in the work to restore the home to its former glory.  By the time the whole story had been deliever, they were promising to help me expand the deck and put in a crushed concrete driveway.  The feelings of guilt really hit when I started driving home.  I knew that the home was going to be pulled out at 7AM the next day and they would find out their new neighbor was a liar.

And so it was at 7AM, A ‘n A Super Toaters, pulled up and attached the house.  They too were greeted by the Wallace’s.  Even with the numbers in their favor, A and A Super Toters pulled out of their without the porches.

The whole situation was unfortunate.  The sons where just trying to do the best they could for their Mother who had lost her home.  I know that losing the home to forclosure must have been horribly hard on all of them.  They had worked hard to create a street full of Wallaces and unfortunately overpaid and were stuck.  I don’t think all fault rests on others but seriously – how would their lives have been different if they had a real estate agent or loan specialist who was honest with them about the value of the area.