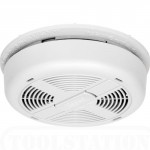 I started on my annual rounds of inspecting the smoke detectors in my rental properties the other day.    I have learned that I must check them myself, as I cannot depend on tenants to accurately report back to me if there is a problem.  Smoke detectors are one of those little maintenance items that you don’t want to ignore, as they can prevent a much larger problem in the unfortunate event of a fire.

During my inspections I found several smoke detectors that had the batteries missing.  When questioned, the tenants of course had no idea how they went missing.  Smoke detector batteries are something that are checked before move-in, so I know they were working when the tenants moved in.

This means that the tenants removed the batteries themselves.  Either the batteries went bad and the smoke detector chirping was annoying so the batteries got pulled, or they needed the batteries for something else and conveniently used the detector batteries.  Either way, I see this as a dumb move.  Needing a battery or being annoyed by a chirping sound is nowhere near as inconvenient as burning to death in your sleep because you were not alerted to a fire in the house.  What’s even worse is that one of the houses with non-working smoke alarms had several small children living there.  It’s one thing to be careless with your own life, but when you have other people you are responsible for, don’t take those kind of chances.

I made sure everyone had working detectors with fresh batteries.  Those with missing batteries got a lecture about keeping them working.  Let’s hope the message sticks and the tenants will realize the importance of having a working smoke detector.