Today’s Fun Friday Story is about my favorite way rent has been paid. 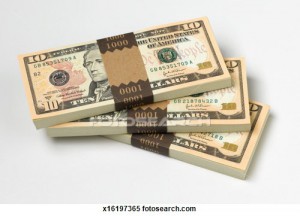 I had a tenant that had gotten behind on rent payments.  I had already given notice to vacate and filed for eviction.  By the time the court date was due, the tenant was behind several months of rent.  At the 11th hour though, they came through and managed to come up with all the back rent that was due, including late fees.  This was a relatively large amount.

The tenant asked if they could pay in cash, which I said was of course fine.  We made arrangements to meet in person so that I could be sure to get it (never trust the mail with cash).  We met up in the local mall parking lot.  When the tenant came out to meet me, they were looking around the area nervously.  They then said that they had a big stack of cash and hoped it was ok.  Cash is cash, so I said it was fine.  The tenant then brought out a huge bag filled with the thousands of dollars of rent owed – all in 10 dollar bills.

The tenant apologized and said that was all the bank had available.  The stack of money was huge.   The tenant was understandably nervous because if any shady person saw us with that money we would immediately be a target for robbery.  They handed the money off to me underhand style.  It felt like I was conducting some illegal deal in a parking lot.  It was actually hilarious.  Even though it was all tens, it was fun to have a stack of money that big in my possession for a while.  It is of course not the recommended way to pay rent, but was kind of awesome.